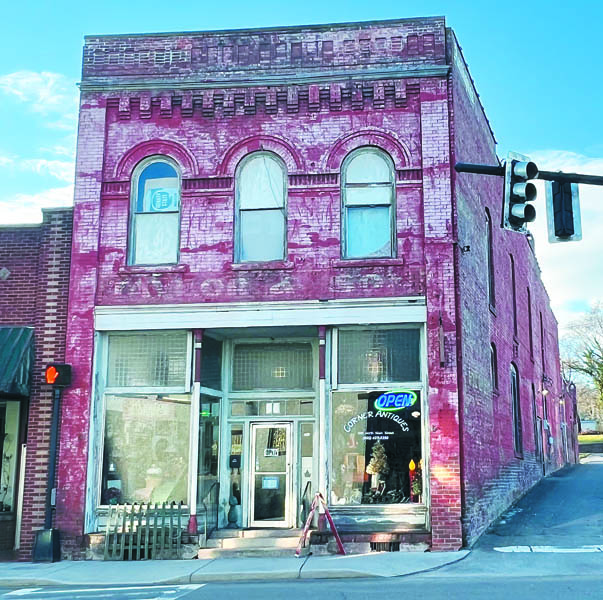 The oldest building still standing in the downtown Clinton historic district is this one at 320 N. Main St., built in the 1890s. It once was the home of The Courier News, but now houses an antique store. - G. Chambers Williams III

Clinton will receive more than $70,000 in a Downtown Improvement Grant that will be shared with five different property owners for improvement and restoration work on their buildings in the downtown area. The grant to Historic Downtown Clinton was announced recently by the Tennessee Department of Economic and Community Development. Clinton was one of 16 Main Street programs chosen to receive these grants this year. Property owners receiving grant money have each committed to up to a 35 percent match of their grants for the improvements, according to the Historic Downtown Clinton organization. The five buildings, along Main and Market streets, are considered “historically significant,” and were built from 1890-1940. Included are: 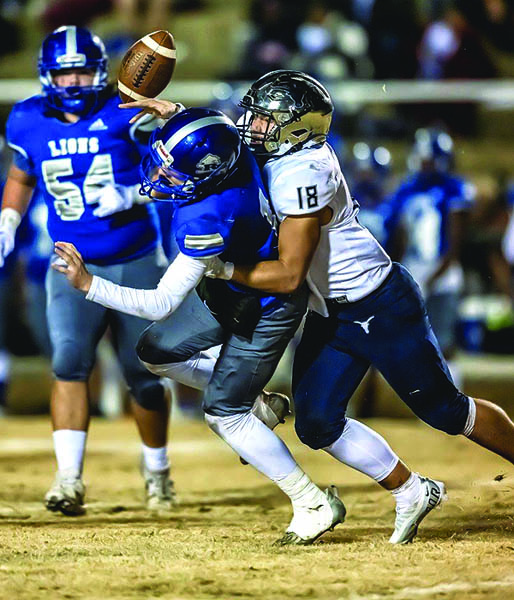 Anderson County’s Nick Moog forces a Lion fumble that started the Maverick scoring onslaught in the second half against Red Bank. - Zack Williams

Anderson County’s neighbors to the south wondered when the Mavericks would show up Friday night. After watching the Red Bank Lions jump to a 13-0 halftime lead in the TSSAA 4A football playoff semi-finals, the Mavericks — the No. 1 4A team in the state — found their rhythm in the second half and took a 29-13 win for the school’s first trip to the state football finals. “We were waiting for you guys to show up,” one Chattanooga sportswriter told Anderson County High School Head Football Coach Davey Gillum after the game. The Mavs did almost everything wrong in the first half. Almost. Anderson County took the opening drive some 91 yards and were knocking on the door with a first-and-goal on the seven. The Lion defense dug in, but with a fourth-and-goal at the three, Mav signal caller Walker Martinez found a receiver in the back of the end zone for … a last- second swipe from Lion Cordell Howard knocked the ball to the ground for a turnover on downs. Following that, the Lions took two plays to get one yard and then on third-and-nine, Lion Eric Hill swung a pass to the flat for Duane Morris, and 96 yards later the Lions had the lead. “In that first drive, we had a lot of things go wrong,” Gillum said. “Missed blocks, missed assignments.

The Anderson County Sheriff’s Office was dispatched to an armed robbery at the Rocky Top 76 Gas Station on Lake City Highway. The suspect, later identified as Carlos Hernandez (21) of Oak Ridge, fled the scene prior to the 911 call being placed. Video surveillance showed Hernandez holding two gas station employees at gun point while taking the till from the cash register. ACSO deputies obtained the vehicle description driven by Hernandez from the gas station security cameras. With the use of new technology at the Sheriff’s Office, deputies were able to track Hernandez to a specific area in South Clinton. During a sweep of the area by ACSO, Clinton Police Department, and members of the 7th Judicial Crime Task Force, the vehicle was spotted at a house on Unaka Street in South Clinton. Hernandez was located and apprehended. He is facing the following charges: • Armed Robbery x2 • Aggravated Kidnapping x2 • Theft of $1,000 - $2,500 • Tampering with Evidence Anderson County Sheriff, Russell Barker, applauded the work by all involved “Today was a great example of a multi-agency effort to locate and apprehend a dangerous criminal. Because of their work, Anderson County is safer with Hernandez behind bars” Barker stated. Hernandez is being held at the Anderson County Detention Facility without bond.

Norris will shine brighter than ever

Thanks to the many contributions given to the Norris Shines organization over the past six months, this year’s holiday lighting celebration will be bigger, better, and brighter than ever before, featuring thousands of extra lights in two new locations. In addition to the downtown gazebo being decorated with lights and showcasing an eight-foot-tall Christmas tree like last year, hundreds of additional lights will be placed in the walkway between the Norris Post Office and the Twisted Sisters Café, in the center of downtown Norris. Mike Robinson is heading up the project to transform this covered walkway into a Christmas light walk-through. According to Robinson, this new lighted location, featuring more than 3,000 lights, should become a Christmas focal point for locals and visitors who would like to take pictures with their families in downtown Norris during the holiday season. “We are hoping to create a lighting winter wonderland photo point similar to what you see in the movies,” Robinson said.

Giving thanks every day  Read More

Back to Chattanooga  Read More

Clinton hoops are working out the kinks  Read More

Lady ’Cats get back to winning  Read More

It’s beginning to look a lot like ...  Read More

Norris will shine brighter than ever  Read More

Faces at the Fair  View