Since then, Miss Personality has become pretty much the shelter’s official four-legged greeter, who loves all the attention from whoever takes the time to give it. And she gives it right back.

She has also played another important role: foster mom to a litter of abandoned kittens, whom she raised as her own after the litter she gave birth to moved on to their new homes.

Now, even though “nobody here wants her to see her go,” Tippy has been put up for adoption, said Damon McKenna, who took over last month as the center’s new director and Anderson County’s animal-control officer.

“It’s for her safety and the opportunity for her to be in a real home of her own,” McKenna said of the decision to part with Tippy.

They are here for you 24/7, and they’re staffed by volunteers – your friends and neighbors who donate their time and efforts, not to mention their own gasoline to come to your aid in almost any emergency.

These are your Anderson County volunteer fire departments, which survive with limited county funding and your generous donations.

And to allow you to learn more about them, most of your Anderson County fire departments are holding open houses this coming Saturday, Oct. 1, from 2 to 6 p.m. at their various stations.

Among them are the Andersonville Volunteer Fire Department, which has three stations. On Saturday, the department will be holding the open house at Station 1, 1957 Mountain Road, Andersonville. 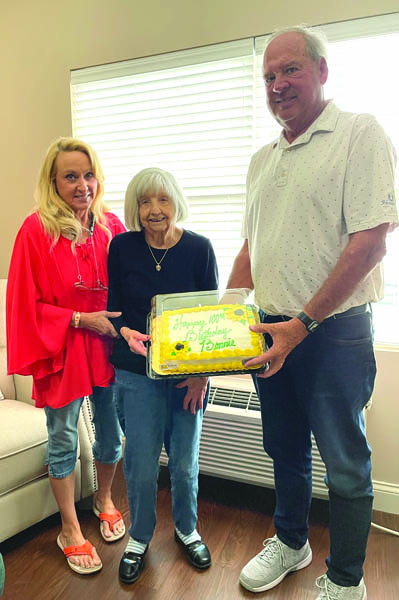 This lovely elder at The Courtyard Senior Living of Oak Ridge, Bonnie Palmer, turned 100 years old Sept. 22. Bonnie was married to her husband, Cotton, for 45 years. Cotton worked in the mines and Bonnie worked for Sears for more than 30 years as a cashier and manager, and she retired from Sears. Bonnie didn’t have children, but she has a nephew, Brian, who she loves very much and he takes wonderful care of her. Bonnie, as you can see, gets around great and you would never have guessed she was 100. Bonnie is a very sweet and caring lady that everyone at The Courtyard Senior Living of Oak Ridge loves very much. Happy 100th birthday, Bonnie.

The Clinton High School Class of 1982 will be having its 40th reunion Friday and Saturday, Oct. 7-8.

On Friday night, classmates will walk in the homecoming parade and be recognized at the football game when the Clinton High School Dragons play Lenoir City.

Saturday night, classmates will gather from 6-10 p.m. at the Hollingsworth Sports Complex on the CHS campus.

Please contact Darla (Fraker) Williams at 865-659-1768 for information or questions.