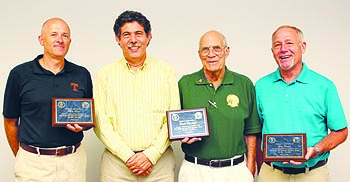 ORSSAB is a federally chartered citizens’ panel that provides recommendations to the OREM program. Its members are appointed by DOE to serve a two-year term and they can be reappointed for two additional terms.

“There is no way to adequately acknowledge and appreciate what you’ve done for us,” said ORSSAB’s Alternate Deputy Designated Federal Officer Dave Adler in presenting plaques of appreciation to the outgoing members.

“With a combined 24 years of service they have attended meetings both locally and nationally, have helped craft recommendations, and have interacted with the public. They have been a huge help to us.”

Board chair Belinda Price also thanked them for their time. “I, too, thank you for your service to ORSSAB. Your commitment has been instrumental to the success of the board, and you will be missed.”

Mike Ford served one term on the board and was a member of the Environmental Management/Stewardship (EMS) Committee.

Howard Holmes was appointed to three terms and was a member of the EMS Committee.

Greg Paulus was also a six-year member and served as chair of the Board Finance and Process Committee from 2012-2015 and was a member of Executive Committee during that period.

During his six years he served on the former Stewardship Committee, Public Outreach and Board Finance and Process Committees, the former EM Committee, the combined EMS Committee, and the Executive Committee.

Hemelright attended and participated in a variety of meetings, conferences, and tours. He represented ORSSAB at the national EM SSAB Chairs’ meetings, presented a paper at the 2016 Waste Management Forum, and attended the 2015 Perma Fix Waste Management Forum. He presented ORSSAB priorities for cleanup at DOE EM’s Public Community Budget Workshops and staffed the ORSSAB booth at Earth Day.

Although they are no longer members of ORSSAB they can continue to participate in Oak Ridge EM cleanup and stewardship activities as public members of the EMS Committee.