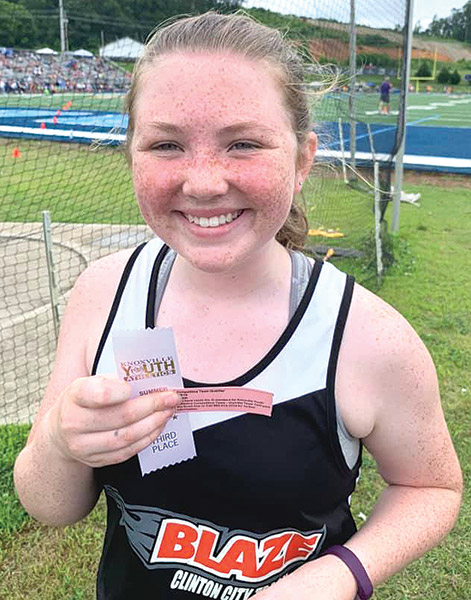 It all started in the fall when the Blaze had cross country teams for the first time. Lady Blaze runner Laci Percival qualified for both the state and national Elementary and Middle School Championship Meets.

The Blaze cross country teams were coached by Terri Curley, who had a busy year.

She also coached the girls basketball team last season and guided the Lady Blaze to a 15-3 record.

Both the Lady Blaze and the Blaze (who went 14-4) competed for the second consecutive season and they played before sellout crowds. Wins were hard to come by during the first season of basketball in Clinton.

Kerley will not coach in 2019-20 as she will focus her efforts on track and field and cross country.

The Blaze also had a dance team that performed at the basketball games.

Also throughout the school year, Knoxville Area soccer pro Chris Carroll held camps for both boys and girls and Stamey said that he looks forward to continue the partnership between Carroll and Clinton City Schools.

The Blaze also fielded swim teams for the first time and Clinton split a pair of meets, defeating the Clinton Sharks and narrowly losing to Norris Middle School.

In the spring, the Blaze had a nine-team bowling league, which was run by coach Tammy Thatcher. The bowlers in the league showed significant improvement throughout the season.

Stamey said that many of the parental volunteers also took up bowling.

The Blaze also fielded track and field teams for the first time and participated in two meets.

The track program was coached by Kerley and received a big boost from the Clinton High School team. The Dragons coaches and athletes hosted a clinic and helped CCS run the Blaze’s meet.

Clinton High also donated equipment to the Blaze, including shot puts and a discus.