Motorcycle rider warns about danger of grass clippings on road 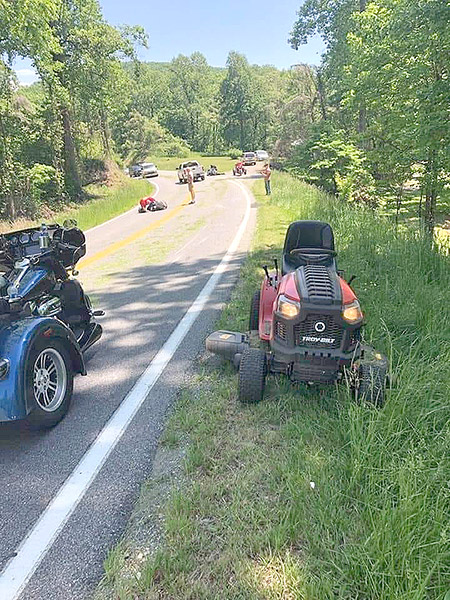 Andersonville resident Robert Pless describes the dangers of grass cuttings on the road for all vehicles, but motorcy- cles in particular.
It’s something most people don’t even think about — if you’re out mowing your yard and your yard clippings shoot out onto the road, it’s not a big deal, right?

According to Andersonville resident and avid biker Robert Pless, that opinion is wrong.

“For bikers, it’s like hitting a sheet of ice,” Pless said. “If you come around a curve on a motorcycle and the road is covered in grass clippings, you’re going down.”

It can be a hazard for automobiles as well. Pless said he has a friend that went around a curve in her car and hit a patch of wet grass clippings.

“She rolled her car three or four times,” he said.

She ended up being OK, but that is less often the case for bikers.

“My wife and I ride,” Pless continued, “and my motorcycle weighs more than 1,000 pounds. If it goes down, it will really do some damage to us. Riders come through Andersonville all the time. On the weekends you’ll hear the rumble from the road. It can be deadly to us.”

The loose grass causes bikers to lose their traction on the road.

Not only is it dangerous, it’s actually illegal on certain roadways, at least in the city of Clinton.

That’s based on Clinton city code 16-107, which states “It shall be unlawful for any person to permit or cause the obstruction of any drainage ditch in any public right of way.”

Blowing grass and debris out onto the road causing it to get into the storm drains, which can clog them up.

According to the University of Tennessee extension office, leaving grass clippings on your lawn are a natural fertilizer. It’s good for your lawn.

Potassium will be depleted from the soil at a faster rate than if you just left the clippings on the lawn. Decomposing grass clippings recycle the potassium, according to the University of Tennessee.

Without enough potassium, the tips of the grass may brown and the entire blades can yellow.

Pless would like the Anderson County commissioners to consider passing an ordinance like the one Clinton has, or some other type of law on the books that results in a fine for people who blow their grass into the road.