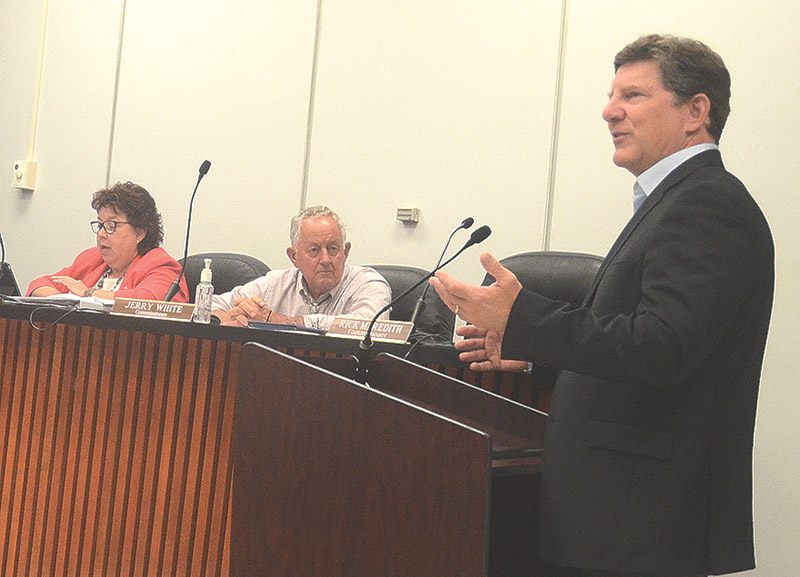 Government officials were given a bus tour of Bull Run Steam Plant Monday, and a “lunch and learn” session was held for those same officials and the media.

Lyash said there has been much speculation in the early days of the process — one being that Bull Run will be taking in coal ash from other sites before it is closed.

“Bull Run is not going to take coal ash from other sites,” he said Monday night.

Lyash told commissioners it is “Important TVA listens to the voices in the communities we serve.”

Bull Run is scheduled to close by 2023. What to do with the site and with the materials left behind — specifically coal ash — has been a hot button topic since TVA announced its decision some six months ago.

Lyash touched on several points concerning Bull Run, the most notable being that he is “determined TVA will set the standard” for cleaning up the site.

“It is a site specific decision,” he said of Bull Run. “It (clean up) has to be the best conclusion for Bull Run.”

Lyash said the plant is 60 years old and has always been run to the highest standards of the times, and that the closure and clean up will have even higher sets of standards.

He noted that what may work at a plant in Gallatin will not automatically work at Bull Run.

And, he said, “TVA has to make sound decisions on how to handle that coal ash in the future.

With the Environmental Protection Agency, OSHA, and Tennessee Department of Environment and Conservation (TDEC) acting as overseers, Lyash said there will be “lots of dialogue, lots of meetings” as the process moves forward.

Lyash said TVA will closely monitor all phases of the closure but will pay particular attention to equipment and handling of the coal ash, the water in the area, and the water processing system.

“Bull Run is non-threatening to the drinking water,” he said. “And we’re going to make sure it stays that way.”

As far as the Bull Run site, Lyash said TVA would love to see it developed to “support the citizens and the economy of Anderson County.”