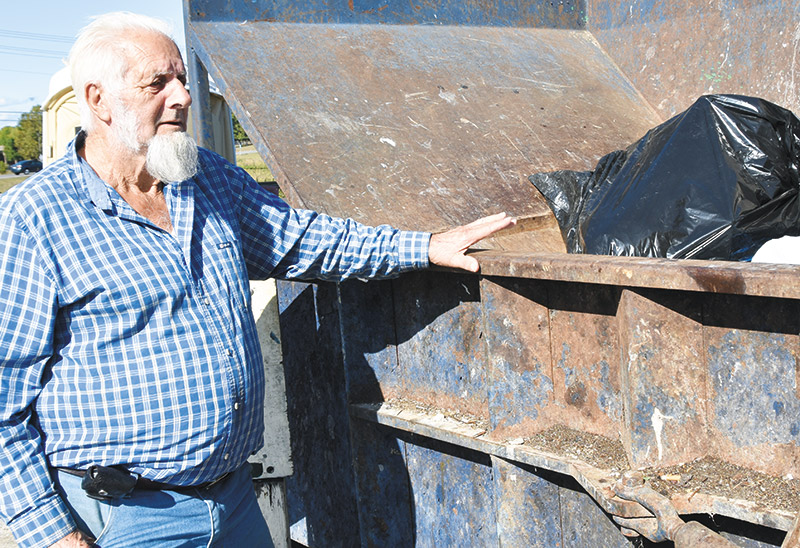 The $670,000 project, which includes $375,000 for the 17-acre site, will replace the current Glen Alpine convenience center on Sinking Springs Road near Ray Varner Ford in Clinton, and will operate at the same hours, 7 a.m. to 6 p.m. Mondays through Saturdays, said Geoff Trabalka, solid-waste coordinator for the Anderson County Office of Planning and Development.

“We’re looking at finishing the building for the attendant, then another week or two to move the compacting equipment from the Sinking Springs site,” Trabalka said. “We’re hopefully looking at mid-November to have it open.”

Paving of the site, including the entrance road, and construction of concrete pads for the trash compactors has already been completed, said project manager Version Davis, who has been supervising the work at the site.

“We’ve been working on it about three months,” Davis said last week,

He was supervising Anderson County prisoners who were working on installing the foundation for the operator’s building at the site.

“The wiring is ready, and the pads are in place,” he said “It’s just a matter of dropping the compactors on the pads and hooking them up. We will try to do it in the most-timely fashion as possible.”

When it opens, the new convenience center will be a vast improvement over the current one, which sits on less than a half-acre and has room for just a few vehicles at a time, Trabalka said. Often, traffic waiting to enter that site is backed up along Sinking Springs Road.

“Essentially it will have the same equipment, but the site will be nicer and newer, and more convenient,” Trabalka said. “I don’t believe there will be any traffic backing up on the highway. I’m sure it’s going to be really nice.

“We started work on the site with grading in late June,” he said. “We widened the turn-in and turn-out lanes, and at some time, we believe TDOT will put in a dedicated left-turn lane to enter the site from U.S. 441.”

Because the convenience center will take only about seven acres of the property the county purchased, the rest of the land will be sold and that money will be used to reduce the overall cost of the project, he said.

Just as with the present center, the new location will accept household garbage; some recycling, such as paper, cardboard and some plastic (but no Styrofoam or garbage bags), as well as aluminum and steel food cans, Trabalka said. It will not take glass for recycling, but it can be dumped with household trash.

“We also will have an open-top container for bulk items, such as couches, mattresses and so forth,” he said. “Still not allowed will be tires, paint, auto batteries, or anything with freon – such as refrigerators, air-conditioning units, dehumidifiers.”

There will always be an attendant on site when the center is open, provided by Waste Connections of Knoxville.

James Rutherford, who has been an attendant at the Sinking Springs convenience center for the past four years, said he’s looking forward to moving to the new site.

“It should be a lot better out there,” he said last week at the Sinking Springs site. “I’ll be glad to get out there. It has to be better than this.”

Rutherford, who turned 80 this year, said he will probably work at the new site through the winter, and “retire again sometime next spring.”

He had retired earlier after working 45 years as a trash truck driver, he said.