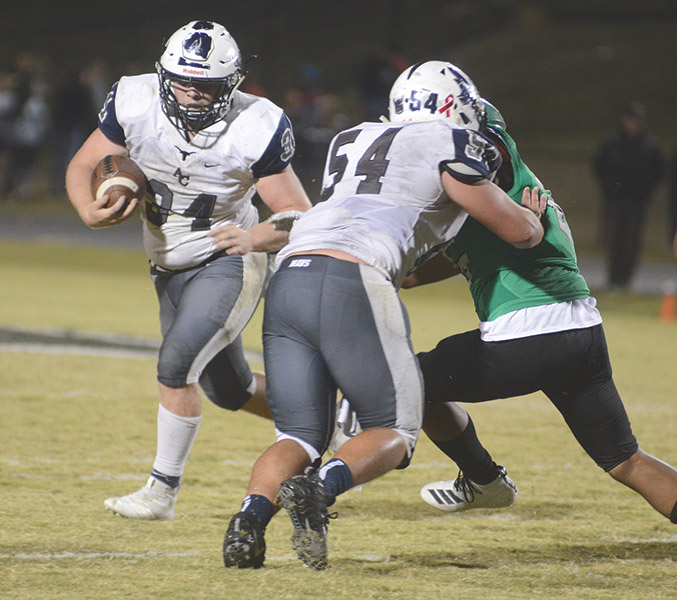 Anderson County’s T.J. Holmes uses a block from Russell Lindsay for a big gain against East Hamilton. Holmes rushed for 191 yards on the night. (photo:Ken Leinart )
It wasn’t exactly pretty.

And then again, it was.

Anderson County High School’s clinching of the Region 2-4A crown — the team’s third in three years — was probably the kind of game the Mavs needed as the playoffs loom.

Anderson County fought off a shaky first half, dominated in the second half, and won 29-14 against a hungry and determined East Hamilton Hurricane team.

Both teams took 4-0 region records into last Friday’s tilt. The ‘Cans had one more loss at 6-2 than the Mavs.

Turnovers hurt the Mavs early and the host was happy to have them, turning two of those give-aways into scores.

East Hamilton led early, 7-0, when ‘Cane Adam Caudle scored on a nine-yard run with 6:49 left in the first.

“We were a little sloppy in the first half,” Anderson County Head Coach Davey Gillum said. “We’ll clean that up. But they (East Hamilton) are a good team. They’re young and competitive and they were ready to play.”

Anderson County got on the board in the second quarter on an errant snap on a punt attempt.

Trailing 7-2, the Mavs took the ensuing free kick and drove for a score, Stone Hatmaker hooking up with Austin Elliott on a perfectly-thrown ball in the end zone from the 16 and the Mavs took an 8-7 lead.

But another turnover popped up and East Hamilton again took advantage.

Caudle added his second one on a 42-yard swing pass from quarterback Haynes Eller with 5:20 left in the second. East Hamilton had again put the Mavs on the low end of the score at 14-8.

But then it was a sign of things to come. Using the bruising running of Holmes, the Mavs notched the tying score with 56 second left in the first half. Daniel Bethel gave Anderson County its first — and final— lead at 15-14.

After that it was the T.J. Holmes show.

The big back would carry the ball 41 times for 191 yards on the night — almost hitting the 200 marks for the second week in a row.

And the offensive line was ...

How good? Holmes scored on a 29-yard run through a hole he could have driven a truck through.

He scored again, in the fourth quarter, on a on one-yard run that saw him go almost untouched — against a goal line defense.

East Hamilton almost made it more interesting — getting the benefit of a roughing the passer call, two defensive encroachments calls against the Mavs, and personal foul face mask, the Hurricanes were inside the Anderson County 15.

It did the hosts little good. Anderson County’s defense came up with three huge plays to turn the ball over on downs and allow the Mavs to run the clock out.

“We have to clean some things up,” Gillum said. “But maybe we needed a game like this before the playoffs start.

“We showed some resilience tonight and we fought our way back from a hole we put ourselves in. You need to be able to do that.”