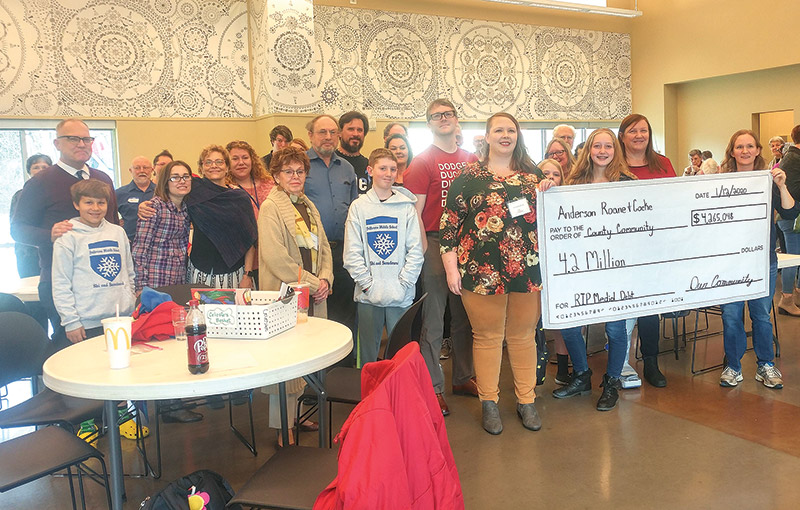 Using their knowledge of the industry, instead of profiting off the debt, they decided to erase people’s debt. About two-thirds of all bankruptcies in the United States are from medical debt. More than a half-million American households each year suffer this fate.

Efforts around the country have been featured in the news and even on the television show “Last Week Tonight,” featuring John Oliver. But there’s never been such a campaign in East Tennessee, until now.

ORUUC is known in Oak Ridge for its many community activities, including free community meals, ministries with homeless families, and giving away half of its offering to the community every week.

Since its founding in 1949, ORUUC has focused its mission on loving its neighbors. But the congregation had never tried something as big in such a short time.

Around Thanksgiving, the lead minister, the Rev. Jake Morrill, introduced the idea to the board and executive team of the church. Hearing their approval, he shared the idea with the congregation.

“I was just floating the idea to see if people were interested,” Morrill said. “But what happened was they started to write checks and to tell all their friends.”

In the wake of that groundswell, the church initially set a goal of raising $15,000.

That’s the minimum amount “RIP Medical Debt” requires for a local campaign — it allows them to buy medical debt at a favorable rate. Within a week, the church heard from people with a regional campaign, seeking to eliminate medical debt throughout Appalachia. That regional fund pledged to match every dollar that ORUUC raised. So, now, if ORUUC met its goal of $15,000, matching funds meant the church would send $30,000 to RIP Medical Debt to erase their neighbors’ debt. That meant that the impact of each gift was doubled. Now, each $100 given would erase $20,000 of debt.

After the first burst of energy, donations slowed.

But word got out and members of the wider community of Oak Ridge started to give. When the dust settled, the campaign had exceeded the goal of raising $15,000. It had raised more than $21,000.

Because of matching funds, a total of $42,000 will erase at least $4.2 million in medical debt. RIP Medical Debt will purchase the bundled debt in the coming weeks.

So, by the end of February, hundreds of lower-income households in Anderson, Roane, and Cocke counties will receive letters informing them that the burden of debt that may have seemed impossible now has been erased.

Last Sunday, Jan. 12, after worship, the congregation celebrated with a thank-you-note-writing event.

“The only way we know how to respond to all of this, and especially to the outpouring of generosity from the wider community, is to give thanks,” Morrill said. “We do nothing alone. Any success here is because of the love that moves throughout our community, which we are blessed to be part of.”