Piers in place across the Clinch; next up, girder beams 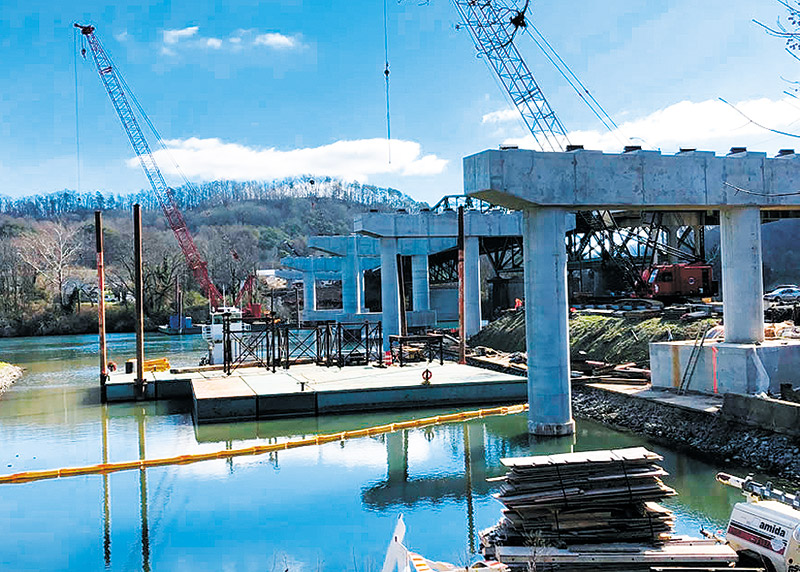 Piers for the Lewallen Bridge replacement on Clinch Avenue across the Clinch River in Clinton are nearly ready for the bridge connecting beams to be installed.
Be on the lookout.

Motorists around the Lewallen Bridge in Clinton will be seeing some trucks pulling extra-long loads in February as the girder beams begin arriving for the new bridge under construction next to the present one.

The longest girders will be steel beams more than 100 feet long, which will come in by truck and trailer from a storage yard in Upper East Tennessee, according to Lynn Murphy, the city of Clinton’s project coordinator for the bridge. Besides the long steel beams, there will also be nine shorter concrete beams.

These beams will rest on top of and connect the six bridge piers and the north and south abutments, which have mostly been completed for the new bridge. Abutment 1, on the north end, is the only one still awaiting construction.

The nine concrete beams will be used for the shortest span over the river, between Pier 6 and Abutment 2, Murphy said. The piers are numbered starting on the north side of the river.

The rest of the piers and Abutment 1 will be connected by the longer steel beams, which will take some special transportation logistics to be brought to the site.

“For maneuverability on the roadways, the trailers [hauling the long beams] must be equipped with a rear steering axle,” Murphy said, and will be escorted through traffic and around turns.

Obviously, that could cause some traffic delays as they are brought to the site.

No exact dates have been given yet, but the beams are all expected to arrive within the next few weeks, Murphy said.

“The first several girder beams arriving in Clinton will be unloaded by crane, placed on a barge, and then positioned for installation,” beginning on the south side of the river, he added.

Excavation is in progress for Abutment 1, and “installation of almost 200 steel beam pilings within the foundation will begin soon,” Murphy said.

Abutment 2 is already completed, he said, as are piers 2 through 6. Work is about to be wrapped up on Pier 1.

A second southbound approach lane to the Lewallen Bridge from Charles G. Seivers Boulevard reopened to traffic two weeks ago after being closed since late November because of a collapse of part of the roadway caused by heavy rains.

That again gave motorists two southbound approach lanes on Clinch Avenue and Charles G. Seivers Boulevard. There is only one northbound lane open over the bridge, and that will continue until the new bridge is opened next year, Murphy said.

“At the previous slide near Abutment 1, three traffic lanes are now in use after crews have stabilized the site,” he said. “More than 50 soil anchors (each 50 feet long) were horizontally drilled through a steel retaining wall and secured with a concrete grout.”

Work to repair the collapse of the right northbound exit lane from the bridge began right after the rains in late November caused that side of the road to slide down the east side embankment.

During the repairs, traffic was restricted to one lane in each direction on Clinch Avenue on the west side of the bridge up to the road’s intersection with Seivers Boulevard, which caused some traffic delays during heavy traffic hours.

The collapse came where construction crews were working to excavate for Abutment 1.

As for the slide, there were no issues with the Lewallen Bridge itself, Clinton City Manager Roger Houck said at the time. “What eroded was the roadway leading up to the bridge structure. The bridge had nothing to do with it, and the bridge is structurally sound.”

Crews working to build an abutment for the new bridge “had driven some metal pilings to pour footings … and water got under those,” causing the easternmost traffic lane to collapse on the exit from the bridge, Houck said.

Because of the reduction to one lane going south, the two left-turn lanes from westbound Charles G. Seivers Boulevard to the Lewallen Bridge were also reduced to one, as were the straight-through lanes from Main Street feeding onto the bridge. Orange cones were placed on those approaches to redirect the traffic.

Once the new bridge opens to traffic, the Lewallen Bridge, better known as the Green Bridge, will be demolished and removed.