Lady Mavs storm into the Top 25 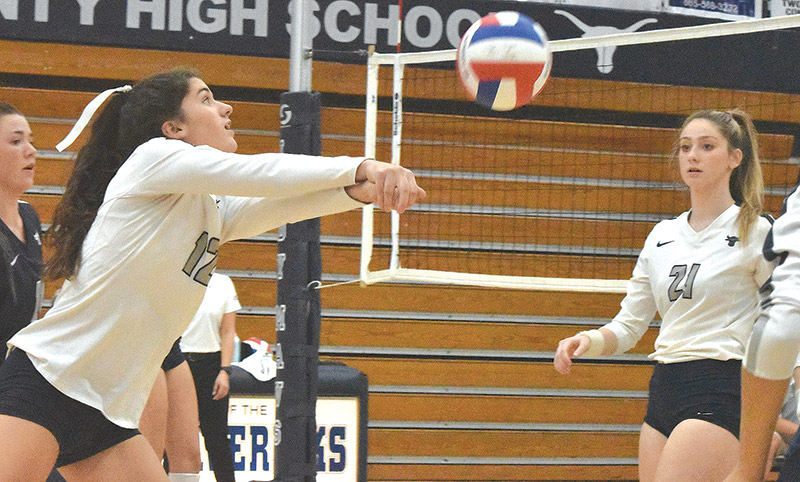 Erin Cantrell jumps for a save against Union County. (photo:Collin Riggs )
The Anderson County Lady Mavericks volleyball team played Union County Thursday, Sept. 3, winning 3-0 in a decisive victory, which the Lady Patriots didn’t break more than 10 points in any of the three sets.

This win put the Lady Mavs at 13-0 for the season, according to assistant coach Dail Cantrell.

The Lady Mavs were ranked first in the state, as well as 24th in the nation, in the most-recent MaxPreps volleyball rankings. The statewide rankings were for both public and private schools. .

“They have a formula they use based on strength of schedule, margin of victory, and other stuff,” Cantrell said. “It’s a pretty good algorithm, because they use the same one for every state. Something like 95-percent of schools use Hudl, and MaxPreps has a contract with Hudl to get the stats directly from them, so there’s no fudging where people can lie about their stats or anything like that.”

Hudl is a program and website, founded in 2006. Its website describes it as: “A leading performance analysis company revolutionizing the way coaches and athletes prepare for and stay ahead of the competition.”

“It’s the first time in Anderson County’s school history that we’ve had a team ranked in the [national] Top 25 in any sport,” Cantrell said. “They’ve only been doing national rankings for about 10 years now, because it was impossible to really do it before the internet. There was just no way to measure state against state, and no real matrix to use. MaxPreps has an actual formula they use, so there’s some rhyme to the reason.”

Anderson County jumped much higher in the rankings after the 2-1 win against powerhouse King’s Academy.

“What’s really helped us has been our out-of-conference schedule,” Cantrell said. “We play exclusively AAA powerhouses and have beaten them pretty well.

“We were ranked 70-something in the poll before we beat Kings Academy, and it bumped us because it was a pretty big win. They’re the toughest team we’ve played so far, and they’ve beaten us the last two years, so it was a pretty good revenge game.”