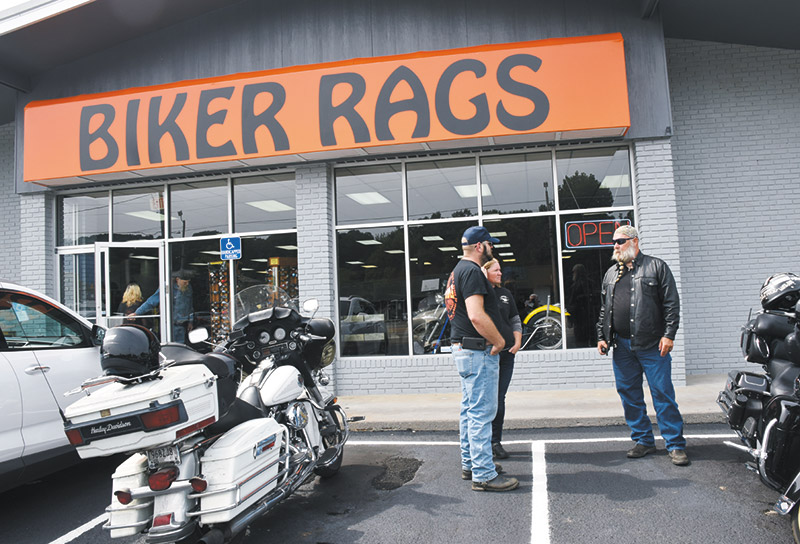 Jeff and Pam Huggins have opened their new Biker Rags store in the former NAPA auto parts building at 800 Clinch Ave. in South Clinton, replacing the loction they operated in West Knoville for more than 20 years. (photo:G. Chambers Williams III )
The new Biker Rags store opened Friday, Sept. 18, in the former NAPA auto parts building in South Clinton, just in time to take advantage of all the motorcyclists out for rides during the weekend’s early fall weather.

Biker Rags, owned by Jeff and Pam Huggins, sells a variety of riding clothes and accessories for motorcycle and scooter enthusiasts.

Dozens of riders flocked to the store at 800 Clinch Ave. on Saturday to peruse the large selection of goods, with some taking advantage of a 25 percent opening discount on leather apparel.

“We’re excited to be here,” Pam Huggins said as she served customers at the checkout desk. “The community has been so nice and welcoming to us.”

John and Carol Israel of Knoxville were among the Saturday customers looking over the selection of leather riding chaps.

The Hugginses moved their store to the site after running their business in Knoxville since 1994. Their former store on Kingston Pike was heavily damaged by fire in June and had been closed since.

Pam Huggins said Monday that the owner of that building had been slow to repair it, so she and her husband decided to move the business to Clinton instead.

“We think this will be a great location for us,” she said earlier. “We like the small-town feel of Clinton, and we live fairly close by in North Knoxville.

“We lost everything in the fire, so we’re making a fresh start,” she said. “Smoke got into everything, including all the leather and textiles, even though the fire itself wasn’t that bad.”

Besides having a wide range of helmets, riding gear and accessories, the store also includes a museum of classic motorcycles the couple has been collecting for years – about 60 in all.

The vintage bikes will mostly be on display in the basement area of the building, but there are several scattered around the main floor upstairs.

According to its website (bikerrags.com), the store carries “more than 50 styles of jackets for men and women -- including leather and textile. We stock leather chaps in single-lined and thermal-lined. We carry a nice selection of two-pieced rain suits in sizes from small to 5XLarge.