No ticket for rail line 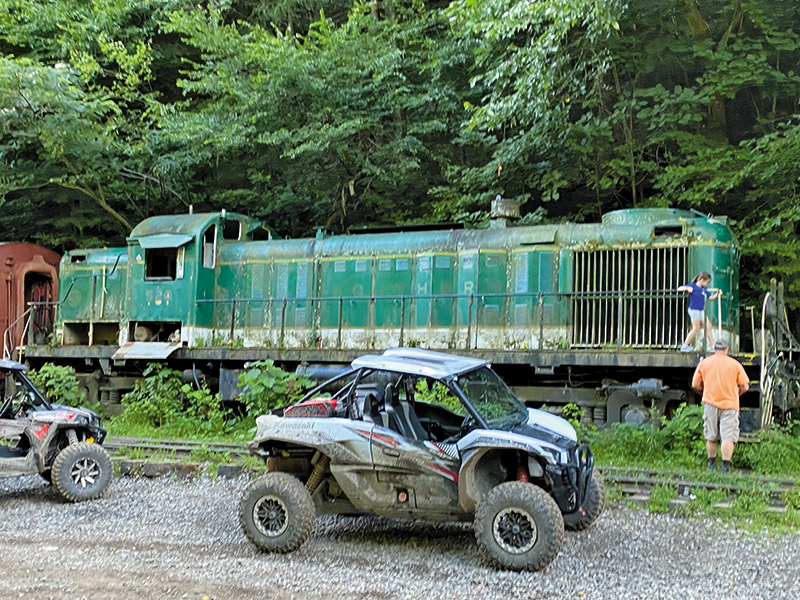 Visitors to the end of the rail line along the New River in remote Anderson County check out the abandoned diesel engine and cars of the former New River Scenic Railroad excursion train. The now heavily vandalized train has been parked in this spot since the excursion line shut down in 2010. (photo:G. Chambers Williams III )
Efforts by local authorities to save an historic rail line running through Anderson, Campbell and Scott counties hit another snag last week as the U.S. Surface Transportation Board denied an appeal to stop the line from being permanently closed.

“Unfortunately, the board did not grant the appeal by [the Arkansas Oklahoma Railroad Co., or AOK] to reverse the director’s decision to reject the [offer by AOK] to buy the rail line,” Anderson County Mayor Terry Frank said Friday.

Frank, who also serves as chairman of the North East Tennessee Rail Authority, has been leading an effort to save the 42-mile railroad line that runs from Oneida, in Scott County, to Devonia, in remote southwestern Anderson County.

The Kentucky-based R.J. Corman Railroad Co., current owner of the line, filed a notice of planned abandonment with the STB in March, and the fight to save the line kicked off in earnest at that time.

As for the STB’s Sept. 23 decision rejecting the appeal, “I am sorely disappointed, but I’m not giving up yet,” Frank said.

The STB’s decision was based on R.J. Corman’s contention that there is no prospect of future commercial freight operations on the line, which has not seen trains run since a coal mine at Devonia closed in early 2013.

But Frank said Monday that the local authorities have the right to request within 20 days that the board reconsider its decision, and that AOK Railroad has a 90-day period in which to seek reconsideration.

Frank said she is encouraged about prospects for getting the decision reversed because the STB rejected the appeal on a 2-1 vote, with the current vice chairman, Martin J. Oberman, filing a dissenting opinion siding with the local Tennessee authorities and AOK.

“Given the strong dissent by the vice chairman, I think it would be worth the effort [to seek a reconsideration],” Frank said. “He’s the vice chairman and also an attorney. To me it looks like he’s making a larger stand for communities wanting to preserve rail service.”

If the line can be saved, AOK plans to work with a company that wants to bring another excursion train to the line, which follows the scenic New River through the narrow mountain valley.

“I personally believe that we showed a need from both a commercial perspective as well as a community perspective, that the line should be saved,” Terry said. “My own opinion is that we should go over and above in efforts to preserve this vital rail infrastructure.”

R.J. Corman said in its latest filing with the federal government that Frank and the North East Tennessee Rail Authority – which includes Campbell and Scott counties – had “no standing” to challenge the STB’s June 26 ruling that would allow for immediate abandonment of the historic rail line, which dates to the late 1800s.

Frank has been wrangling with R.J. Corman in her efforts to save the line for more than two years.

In its reply to Frank’s appeal on behalf of the rail authority, Corman said, “The [rail authority] does not own the Oneida Line, nor did it submit an offer of financial assistance in this matter. It cannot now appeal the Director’s Decision in its own right.”

But officials involved in the effort to save the line for the proposed tourist train operation and future freight service said Corman’s statement wasn’t true, and that the rail authority legally owns a 21 percent interest in the line. The rail authority has provided as much as $2.1 million in state financial aid to keep the rail line operating, they say.

The North East Tennessee Rail Authority was created by the Tennessee legislature to manage and preserve railroad assets, and the mayors of all three counties are members of its operating board.

Frank’s appeal was in addition to an appeal by AOK, the unsuccessful bidder for the rail line through the STB’s “Offer of Financial Assistance” process. Both appeals were filed with the STB after its June 26 order denying the petition from Arkansas-Oklahoma Railroad Co. to purchase the line from the R.J. Corman for $424,000.

In the appeal filed by the local railroad authority and signed by Frank, at least three prospective customers were mentioned as potential shippers or users of the line, with the prospects of moving more than 1,000 rail cars a year on the line.

“[The railroad authority] asserts that the [STB] Director’s decision [to deny sale of the line] is based on a ‘clear error of judgment’ based on the new evidence of shipper need for rail service set forth herein,’” the mayor’s appeal began.

The appeal noted that at least two logging operations and an Arizona-based railroad car storage and maintenance service have plans to use the line if it is preserved and reopened.

In a separate filing, the Phoenix company, IRAIL Car Services, told the STB that it would be a major user of the line.

The rail authority’s appeal concluded that “the Board should find that NETRA and AOK have met [the] requirement of a ‘continued need for rail service’ and grant this appeal to prevent manifest injustice or correct a clear error of judgment.”

If all appeals are ultimately denied, the STB’s June 26 ruling would allow Corman to abandon the route and begin pulling up track and other components of the line.

In its decision, the STB said that the proposed buyer (Arkansas-Oklahoma Railroad) had not “sufficiently demonstrated ‘a continued need for rail service’ on the line,” adding that the line had “no active shippers.”

According to the STB, for the proposed buyer to win a bid for a rail line that is about to be abandoned under its rules, “an offeror must demonstrate through evidence that there is a continued need for rail service on the line.”

Statements supporting the bid by the Arkansas-Oklahoma Railroad Co. of Wilburton, Oklahoma, were filed by Anderson, Scott and Campbell county governments, the North East Tennessee Rail Authority, and others, including two proposed shippers on the line – National Coal Co. of Knoxville and Evergreen Packaging Co. of Pioneer. Both said they hoped eventually to ship coal and timber, respectively, on the line at some point.

The STB said that while the purchase offer (Offer of Financial Assistance, or OFA) by Arkansas-Oklahoma Railroad and the statements submitted by the other parties showed that there was “community support for preserving the Line,” but that they provided “no specific detail demonstrating any commercial need for rail service.”

The board also dismissed the use of the line by the planned passenger rail excursion company, saying that provisions allowing a forced sale under an OFA require future use of such a line for freight shipments, and that passenger service does not qualify.

The STB’s June 26 decision would allow a trail consortium to continue working with R.J. Corman on an agreement to turn the line into a hike-and-bike trail, which would at least preserve the right of way for future use as a rail line, if necessary. But the steel rail and ties would be removed, and any reinstallation of those could be cost-prohibitive, Frank said.

Owned by Norfolk Southern Corp. (formerly The Southern Railway) from 1973 until Knoxville-based National Coal Corp. bought it in 2006 for $2 million, the line was begun in 1889 and extended to its current terminus at a now-abandoned coal preparation plant at Devonia in 1912.

When National Coal was on the verge of bankruptcy in 2010, it sold the line to R.J. Corman for $3 million, and it was used to haul coal out of the Fork Mountain area from a deep mine until that operation shut down in 2013. Since then, the line has not been used, and has fallen into disrepair.

Part of the line from Huntsville in Scott County to Indian Fork in Anderson County did have a short life as a tourist excursion route from 2008 to 2010 when Scotty Phillips, owner of the New River General Store at Devonia, and business partner Jimmy Byrge of Knoxville started the New River Scenic Railway.

They ran the train – consisting of a vintage 1951 Alco RS3 diesel locomotive and two passenger cars – until shortly after R.J. Corman bought the rail line from National Coal and proceeded to terminate the excursion operation’s rights to use the tracks.

The former New River Scenic Railway engine and two rail cars – which Phillips brought here from Arizona -- have sat abandoned on a siding behind the Devonia coal-prep plant along Tennessee Route 116 since 2010, and all three units have been heavily vandalized.