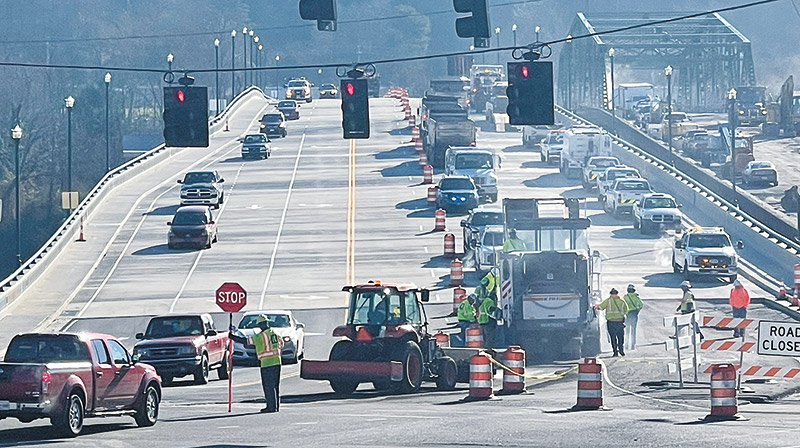 A flagman directs traffic through the construction zone as a crew lays down asphalt for the connection of the new Lewallen Bridge to Tennessee Highway 61 in Clinton on Monday morning. Later in the day, traffic was jammed up in both directions. (photo:G. Chambers Williams III )
Work is underway — and snarling traffic — to complete all of the traffic lanes and their connections to the highways on both ends of the new Lewallen Bridge over the Clinch River in Clinton.

The work created traffic jams leading up to the bridge on Monday, with some motorists waiting more than an hour to get into Clinton from Clinch Avenue.

The bridge has been partially open to traffic since Oct. 12, but some of the lanes on the south side of the span have remained closed to traffic as workers built sidewalks, bike lanes and a center dividing lane.

Lynn Murphy, the city of Clinton’s liaison to the Tennessee Department of Transportation on the bridge replacement project, said Monday that the TDOT contractor and an asphalt subcontractor had begun asphalt paving operations to complete the full-width of the bridge, and that work would continue through Wednesday.

“Once asphalt is finished, pavement-marking crews and traffic-signal techs are on stand-by to move in and do the finishing touches,” he said.

“Asphalt is being installed on the approaches on each end of the new bridge (no asphalt on the bridge deck),” he said.

“Once asphalt paving is complete, pavement markings will be installed, opening the full-width of the bridge and creating five northbound lanes, two southbound lanes, a center dividing buffer lane, and bike lanes in each direction,” he said.

He added that the bridge contractor has hired “off-duty law enforcement [officers] to direct traffic during this operation, particularly at the traffic signals at the SR 9 [Clinch Avenue] and SR 61 [Charles G. Seivers Boulevard]” intersections.

Murphy had said in mid-November that the contractor planned to have all lanes open by mid-December.

Work has already begun on removal of the historic Green Bridge, which the new bridge has replaced.

There has been no official word yet on when the main overhead structure of the bridge will be taken down.

The old bridge has been a Clinton landmark since it opened in 1938.

Workers have already begun removing the concrete deck of the old bridge.

“Once all concrete is removed, steel removal begins,” Murphy said earlier. “Large sections of steel will be cut free using handheld oxygen-acetylene cutting torches. A barge-mounted crane will hoist the large sections, then lower them to an empty barge.

“Here, the larger sections will be cut into smaller pieces, and then transferred to trucks for removal.

“The large beams will be retained for future use, and the smaller pieces will be recycled as scrap iron,” Murphy said. “All steel belongs to [bridge contractor Blalock Construction], by contract.

“When all the bridge steel is removed, the two concrete piers will be removed from the river by sawing them off a few feet above the water surface level. The remaining concrete pier sections in the water will be drilled vertically and then broken apart using low-level explosive charges. Once detonated, any concrete and reinforcement steel in the water will be removed using a clamshell bucket attached to a crane cable.”

Work on the new bridge began in September 2018. Contractor for the $27.6 million dollar project is Charles Blalock and Sons, Inc. of Sevierville.

According to the state Transportation Department, the “existing steel truss bridge was replaced by a webbed-steel girder [bridge] utilizing drilled shaft foundations.”

Drivers will benefit from new traffic signals, improved signage and striping, and raised pavement markers that were included in the project, a TDOT official said.

The traffic lanes were widened to 11 feet from the nine-foot width of the old bridge lanes, and two six-foot-wide bike lanes were added.