December 15, 2021 by Richard Evans Special to The Courier News 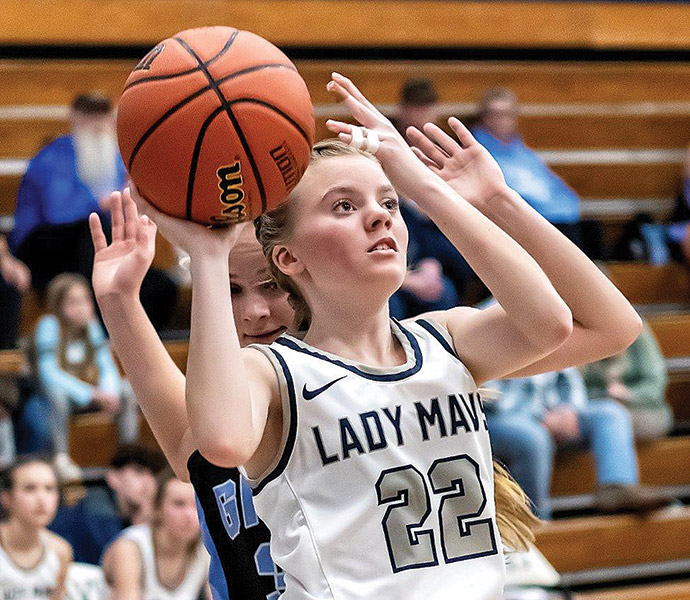 Lady Mav Rowan Smith puts up a bucket against Gibbs last week. (photo:Ricky Williams )
The Anderson County Lady Mavericks are on a roll as they claimed wins over Gibbs, Scott, and Carter in the past week.

“We shot the ball pretty good and defensively we played good for the most part,” said Mitch Cupples, Anderson County head coach.

“We had a couple of breakdowns, but overall, I think they [Gibbs] wound up shooting 25 percent from the field so there were a lot of misses and a lot of rebounds to be had,” he said. “Offensively, we got a bunch of shots in the paint.”

Anderson County outscored the Lady Eagles in every quarter, leading 31-22 at the half and 43-30 at the end of the third quarter.

On Friday night, the Lady Mavs claimed a huge district road win by a score of 39-35 at Scott.

“It’s a pretty big win on the road. It was a hard-fought win and kind of a slow, methodical game. We just kept plugging away,” Cupples said.

Anderson County fell behind early, as the Lady Highlanders took a seven-point lead in the first quarter. The Lady Mavs cut into the lead to trail 21-15 at halftime.

In the third quarter, Anderson County cut the deficit to 26-24. They outscored Scott 15-9 down the stretch to take the win.

“It was kind of a struggle. Both teams were missing buckets. Neither team shot it well. It was a physical game. A win is a win. We just need to find a way to scrap it out,” Cupples said.

After a low scoring first quarter, both teams shot the ball better in the second quarter as the game was tied at 19-19 at the half.

The Lady Mavs put 15 points on the board in the third quarter as they went up 34-27. They finished just ahead of the Lady Hornet’s scoring pace in the fourth quarter to take the win.

The Lady Mavs will host district rival Halls Friday night at 6:30 p.m. They open play in the Anderson County Christmas Tournament Saturday at 3:15 p.m. against Stone Memorial. They will also have games on Monday and Tuesday with opponents and times to be decided.