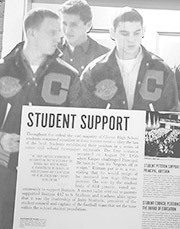 But it didn’t come easily for the Mavericks football team, which had to overcome a large halftime deficit to notch a 35-34 overtime victory over Elizabethton Friday night at ACHS.

“I’m proud of the way we fought tonight,” Anderson County Coach Davey Gillum said. “As a high school coach, you talk about life and we fought, fought, fought.

“Our kids took the opportunities to make the plays. They made the plays they had to make.

On a night of big plays for the Mavericks, who are 6-0 this season after avenging last year’s 45-7 second-round playoff loss to Elizabethton, it was two big defensive plays late that gave ACHS the chance to win.

Late in regulation with the game knotted at 28-28, Elizabethton (1-4) was driving for a potential game-winning touchdown when Jermaine Allen came up with an interception.

ACHS then ran out the clock, sending the contest to overtime.

In the extra frame, the Mavs scored on their first play when quarterback Walker Martinez connected with Bryson Vowell on a 25-yard strike. Kicker Chris Nelson added the extra point to give the home FOUGHT

The Cyclones responded as they scored on their first play of OT, but coach Shawn Witten opted for a potential game-winning two-point conversion and the ACHS defense stopped a run up the middle and the spirited Anderson County fans stormed the field to celebrate a victory that avenged last year’s second-round playoff loss.

The Mavericks scored the game’s first touchdown on their opening possession after stopping the Cyclones.

Martinez gave the Mavericks the lead when he threaded a 51-yard scoring strike to Tate Russell, who juggled the rock, but kept his concentration as he raced by two Cyclone defenders for the score. Nelson added the PAT to extend ACHS’s advantage to7-0 with 8 minutes, 47 seconds remaining in the opening frame.

The Cyclones closed out the first half by scoring 21 unanswered points. Elizabethton then forced a punt on ACHS’s first possession of the third quarter.

But the Mavericks would rally to tie the game, 21-21, on a short scoring run by Nick Moog and a 4-yard touchdown pass from Martinez to Vowell.

Russell added to his big night when he intercepted a Cyclone pass to stop a drive by the visitors.

But the Cyclones regained the lead — and ACHS pulled even when Martinez connected with Braden Miller on a 28-yard TD pass, making it 28-28 with 3:42 left in regulation.

Next up for the Mavericks: Anderson County returns to Region 2-4A play when it travels to Strawberry Plains to face the Carter Hornets Friday night.